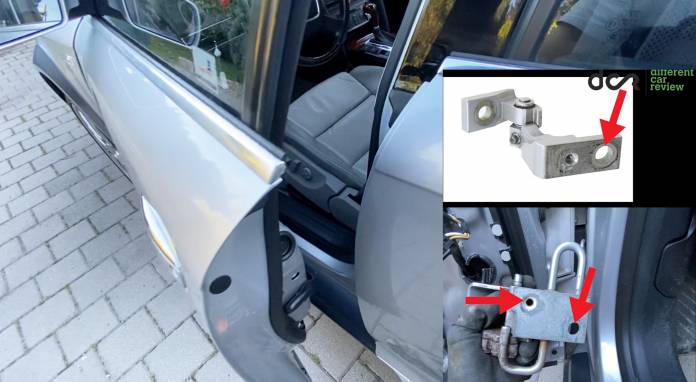 Over time a car door can start to sag which will result in a: “slamming the door like an animal experience”. But don’t worry, since you can fix this !

Mostly the driver’s door can start to sag since it’s opened and closed the most. There are various speculations why is this happening: some say it’s because of the body of the car which gets weaker over time, and some say it’s the hinge which gets worn. I think that on some cars it can be the weak body, but on most of the other cars it’s just the worn hinge + of course, let’s not forget the cars which were crashed and repaired (in this case the body can get weaker) + if the door was removed in the past and not aligned properly when put back → then this can also be the reason of the problem.

Interestingly, this hinge looks pretty damn strong if you ask me. I mean if we compare it to some other hinges mounted on French or Japanese cars, then it really looks like that this hinge will last an eternity and the other hinge is going to fall apart after the first shutting of the door. But at the end of the day everything gets worn at some point.

In this post/video I will show you all the possible methods how to fix this issue on these cars which have this kind of a hinge. But I think that you can use some of these methods on other cars too.

In total there are 4 methods how to make the sagging door to close easily:

This 1. fix is actually a bad method, but even though it’s bad numerous owners used it since it’s fast and easy and because of this you should know about it. This striker plate mounted on the B pillar is basically the catch of the door lock (on the picture below). Now, numerous owners simply moved the striker plate a bit lower, and this way the door is indeed going to close easily. But since the striker plate is lower → the door is also going to sit lower on this side → so it’s not going to be adjusted properly (the door is not gonna be flush with the body) which can cause excessive wind noise. And that’s why this is most of the time a bad fix which doesn’t fix our main problem with the sagging.

The second method is much better so you can of course try it. In this case you have to loosen the 3 hinge screws on the door and move the whole door up. For this task you can use a jack or someone who is willing to help holding and pushing the door up. For the screws on this A6 you will need a Torx T45 bit. With the loose screws you can push the whole door a little bit up, tighten the screws and that’s it. In this case the door is going to be a bit higher which means that it will be indeed easier to close it, so this can basically fix your problem.

However keep in mind that: in a lot of cases and in this particular case too → this tiny amount of vertical adjustment is not gonna be enough to fix your door sagging issue completely + if you accidentally manage to put the door out of alignment (and you most probably will) then you will spend some extra time readjusting the position of the door inwards or outwards the body.

Fix 3. According to service manual

The fix number 3 contains another 3 submethods which are more complicated but also much better than the previous methods.

→1. So according to the service manual the only real and proper way to adjust the door as we need it, is to loosen the screws on both of the hinges and move the hinges to the correct position together with the door. This sounds great, but in this case you have to loosen the screws which go from the hinges to the body (NOT the screws from the 2nd fix). Now, the lower as well as the upper hinge have an outer screw which you can see. But they also have an inner screw which you can’t see. In this particular case you can access the outer hinge screws only if you remove the whole door or the fender.

→2. Because of this some people said fuck it, and they loosened only the 3 accessible hinge screws, so they left the one not accessible upper hinge screw tightened → and this way they adjusted the door according to the already mentioned method. To be honest, I don’t know if this is gonna work, but some say it’s working, so if you want to try it then you can. Interestingly if you want to adjust the rear door this way, then you got a very simple task since after removing the inner B pillar trim you get a perfect access to all the inner hinge screws and you can adjust that shit however you like.

→3. The last submethod of this 3rd method is to replace just the lower hinge with a new one. Yes, this should fix your issue, but for this you have to buy a new hinge, paint it, and again remove the door or the fender + the inner trim to access the inner hinge screw, obviously.

Fix 4. – After all this we should finally check out the last fix which is the easiest, fastest and most effective. There is a metallic plate attached to the hinge, and all you have to do is: keep the door in position with a jack for example, unscrew the 2 screws on the door, slightly push the door up, and slide a similar plate behind the original plate. Screw back the screws and call it a day!

In this case you have 3 choices:

-first you can use some regular shims, but this not very cultural to say at least

-or you can simply buy a used complete lower hinge, remove the metallic plate from it, throw away the rest, clean and smoothen the surface of the plate and put that shit in there. Just keep in mind that with this plate the door can sit even a bit HIGHER than you would like, so be prepared to somehow reduce the thickness of the plate.

At the end of the day I don’t care what method you gonna choose, but choose wisely! 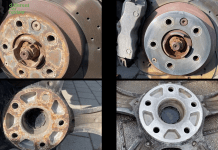 Always clean THIS when changing your wheels