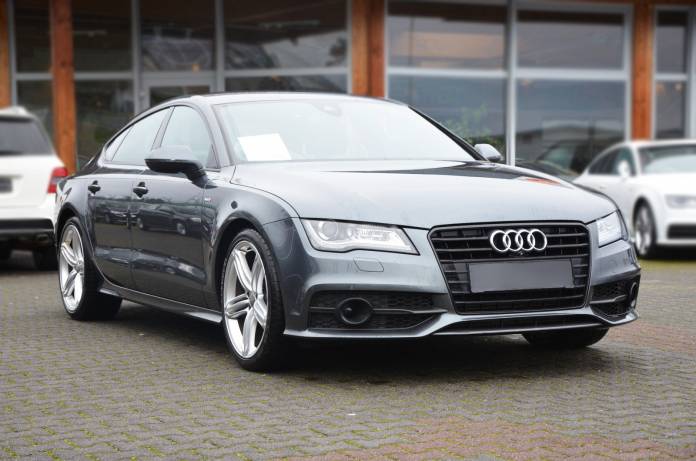 The Audi A7 is based on the 4th generation A6, so they are using basically the same engines, technologies and they have almost identical interiors. The styling of the exterior is obviously completely different and this should be the reason to choose the more stylish and more uncommon A7 instead of the more casual A6.

The interior of this A7 is, as I said, almost the same as in the A6.

The ergonomics is also great – you get a dashboard which is slightly inclined to the driver, a clear instrument cluster with a nice optional central display which can show everything including the navigation system map, and there is also the simple and clean MMI system control panel. After a little bit of practice you get used to this layout very well, so you can with no problem choose the right category or change the temperature easily with physical buttons even while driving (something you can’t really do on a touchscreen).

+ The interior is more spacious than in the BMW 6 series Gran Coupé and the Mercedes CLS from that time.

The rust protection of this A7 is very good, so there shouldn’t be rust on the body panels. Although as usual, check the body properly for rust, for paint defects (mismatched paint on the different body panels) and check for inconsistent gaps between the body panels which indicate possible crash and repair in the past.

“It’s good to open the hood and check the fender screws too – they have to be completely intact. If they have damaged paint then somebody removed or replaced the fenders for example because of a crash or just because of some scratches which had to be repainted. Also check the screws on the door hinges – the same thing applies to them as well.”

This A7 is overall a reliable car but some minor issues can occur here and there, so it’s good to check the following things more closely.

-Test that fancy navigation system screen, it should work without some jerking or strange noises.

-Then check the electronic rear spoiler which can be stuck and you will eventually see an malfunction massage as well. In this case the problem will be most probably with the spoiler module.

-The illuminated door sills are definitely nice, but there are cases when they simply fail – although they were most of the time replaced under the warranty.

-And check the rubber gaskets on the exterior mirrors for damage – it’s the rubber that you see when the mirrors are folded. If this seal is damaged then you can’t replace only the seal itself but you have to buy the whole mirror assembly which is not cheap.

It’s also very important to have the latest software updates which can fix various minor issues – for example with the bluetooth handsfree system, navigation system, radio, or even with the transmission.

This Audi is equipped with the frameless door windows which are nice, but they can be rarely not aligned properly: In this case you will see a bigger gap between the window and the body + you will hear excessive wind noise from them while driving.

Of course compared to the A6 you will hear a slightly bigger wind noise because of these frameless windows, but that should not be surprise.

“You should also as usual check the all the window regulators-they should work smoothly without some kind of a grinding/squeaking noise.”

This car was available with:

-or with the also optional adaptive air suspension (dynamic, comfort or lift modes)

The air suspension is most of the time reliable, but you should be prepared that after 10 years the chance of leaking air struts increases, so have that extra money for a genuine or aftermarket air strut if you are buying an older car. (the price for a new genuine air strut is around 1 147 € / $1 300)

Also keep in mind that the suspension height sensors can seize up over time – causing various creaking noises (eventually they can also break), so after buying it’s good to clean and re-grease them.

“Listen for any unusual knocking, clunking, squeaking or other noises from the suspension and steering. The control arm bushes can be worn mainly if the car was used on bad quality roads with bigger wheels.”

The standard equipment included some basic features, like the: manually adjustable front standard seats, basic navigation system with a smaller central display and without the touchscreen, a basic dual-zone air conditioning, front and rear parking sensors, or cruise control.

The optional equipment included things like: better navigation system with a bigger screen and with a touchpad, 4-zone automatic AC, night vision, adaptive cruise control, electrically adjustable front massage seats which are heated and ventilated, heated electrically adjustable steering wheel, soft-close doors, the 14 speaker BOSE sound system or the even better 15 speaker Bang and Olufsen sound system and I could continue telling you the other features but it’s like a never ending list.

By the way, there are also 3 types of  front seats:

-or the best, most comfortable comfort seats – which are fully electrically adjustable only

The facelifted version of this car was made from 2014. This facelift included brand new matrix headlights, faster MMI multimedia system with better graphics, new exterior and interior color combinations and some other minor updates.

All the petrol engines are most of the time reliable, so you can expect only regular issues. But since they do have direct injection you should use only high quality premium fuel, change the oil after max. 10 000 km, change the spark plugs after max. 60 000 km and use the car on longer distances too (and after warming up you should also occasionally use the engine performance to the maximum-don‘t be afraid to rev the engine). By doing all this you can at least minimize carbon-build up or issues with faulty ignition coils.

-start the car when it’s cold and check for an uneven idle or shaking which indicates misfires, the engine has to run smoothly all the time

The diesel engines should be very reliable at least to approximately 200 000 km. After this mileage point they can start to develop problems with the injectors, timing chain mechanism, DPF filter, and don’t forget that there is also the Adblue system which helps reducing the emissions.

This Adblue headache system is fitted only in cars made from 2014 or 2015 (check if the car is equipped with it). Long story short it’s an unnecessary garbage instrument which has it’s own sensors, wires, a heater, a tank, an injector and a pump which can fail as well. So I would highly recommend having some extra money, just to be prepared to change these focking parts which are helping nobody! Even the polar bears are complaining and asking if this shit is really necessary!

Lastly, there are rare cases of faulty Bosch CP4 high pressure fuel pumps in these engines. This HPFP can fail because of the different fuel used in the US or Eastern EU, and if it fails it will throw tiny metal particles in the fuel system and thus destroying the injectors. You can find more information about this problem in the used BMW X5 F15 review.

-check for light grey colour smoke during acceleration or at idle after properly warming up the engine (after 10-15 km of drive), the engine has to run smoothly all the time without fluctuating/bouncing RPM, and without smoke after warming up

-and don’t buy a diesel engine A7 if you want to use the car mostly on short distances, since if you will use it only for short commutes then sooner or later you will end up with clogged DPF, fuel mixing with oil because of improper DPF burn off, issues with the Adblue (if the car is equipped with it), and issues with the EGR

All the engines are equipped with timing chain. The timing chain tensioner on the diesel engines and sometimes on the petrol engines can be easily worn even before 100 000 km. So check for a short rattling noise at cold start which indicates worn tensioner/eventually stretched chains.

If you want to change the timing chain or the tensioner then the whole engine has to come out so be prepared to spend more than 3 000 – 4 000 € for this repair. However in this case there aren’t many catastrophic engine failures because of this rattle. Although if the chain rattle will become excessive over time and if the car has more than 200 000 km then there is a bigger chance that the loose chain skips and eventually destroys the engine.

This A7 can be equipped with the 7 speed dual clutch automatic gearbox, the 8 speed regular automatic transmission or with the Multitronic CVT gearbox.

–The 7 speed dual clutch S-tronic can have problems with the mechatronics unit or later with the clutches. So definitely check the gearbox properly before buying-it should change gears smoothly without some kind of a strange noise, hesitation, slipping or shuddering. If it’s not changing gears properly and smoothly then be prepared that you will need to have it repaired or rebuilt which can cost up to 3 500 € at an independent gearbox specialist.

There are also cases when the owners do hear a strange humming noise from the gearbox area at a certain RPM and speed, so check for these noises which are mostly very hard to diagnose. On the other side they usually won’t do any harm, although who knows what they can cause in the future since if the noise is caused by a worn bearing somewhere deep in the gearbox then it’s definitely not the best thing in the world.

–The 8 speed regular automatic gearbox is most of the time reliable, as well as the CVT Multitronic-with regular oil changes of course. So you should definitely change the oil regularly in all of the transmissions to minimize the possible issues.

“The car should ride smoothly without any vibrations at steady speed and while braking. Don’t forget to check for uneven tire wear too, which is the result of the incorrect wheel alignment or worn suspension parts.”

I hope that these information are helpful enough, if you have personal experience with this car, then write it into comments!