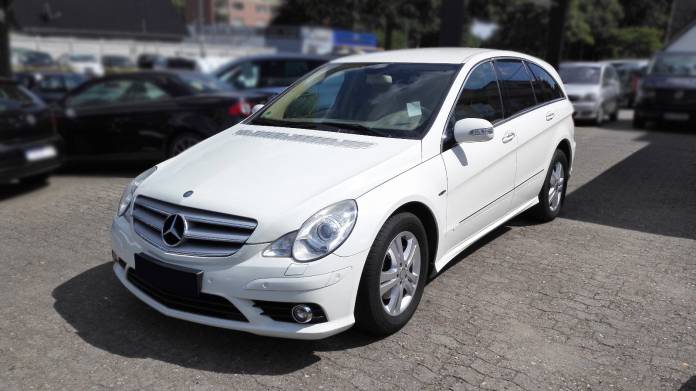 The Mercedes R-class is this weird looking big Mercedes. But while the unusual front design of the before facelift version is a bit questionable, you can’t really question the main qualities of this car. It’s a big, spacious, practical and comfortable family car. The reliability of this R class is basically the as the reliability of the Mercedes M-class from that time, since it shares a lot of the components, the electronics and also the engines with this SUV.

The interior is spacious enough even in the standard version, but if you want more trunk space and if you want to use the third row seats more often than it’s better to choose the long wheelbase model.

There are plenty of storage areas, the front and back seats are comfortable, and you can find mostly well equipped cars with plenty of features + the materials in the interior are usually not worn even in cars with 400 000 km or more. Maybe the only disadvantage is the navigation system which is that slow, older unit – so you can’t expect a fancy up to date touchscreen multimedia system in these cars.

With the proper maintenance this Mercedes can reach 300 000 or 400 000 km without major problems. But generally speaking it really is better to avoid the early production cars, mainly because the models made to 2007 or early 2008 do have more often various-usually minor mysterious electronic (and some other) issues:

–The rear electronic tailgate can cause some issues. It’s either not working at all, or it just can’t open or close properly. Sometimes the latch is faulty, sometimes the hydraulic lifter pump, and sometimes the issue is in the control module or in the wiring harness. Interestingly occasionally even the dealer can’t diagnose what exactly is wrong with it.

–Battery draining can also occur on these early cars, so make sure the battery is in good condition and occasionally have it checked.

“Most of these minor problems were already fixed under warranty or by the owners, but of course some of these cars can still suffer from these issues.”

On the other side cars equipped with the 4MATIC 4WD system can have a more serious problem with the front differential and with the transfer case, but again mostly just to early 2008. However some say that it affects the newer cars as well, although not that often as the older models, either way:

-The front differential and the transfer case can fail simply because of worn bearings. The good thing is, that you can change only these faulty bearings so it’s not necessary to buy the complete part-although you still have to disassemble the front differential and the transfer case to change these bearings. The usual symptoms of this issue are strange whining, growling, howling or grinding/clicking noises from the front while driving. You can hear these strange sounds usually while letting off the gas or coasting + check for strange vibration from 1 800 to 2 000 RPM.

“Changing the fluids in the differentials and transfer case after 90 000 km is definitely a good idea.”

Because of these possible problems, I would simply not recommend buying an early car. Of course it can be good, it can work well for a long time-mainly if most of these things were already fixed, but there still is a bigger chance that it will have some kind of a design flaw.

-It’s very important to check for water leaks in the interior, mainly under the passenger seat – since the battery and some of the control modules are located in this area. The water can easily leak in there thru the cabin air filter which is located under the windscreen on the passenger side. There is a plastic air inlet which fills up with water-if the water drains under this inlet are clogged of course. And the water simply leak thru the air filters into the interior, to the battery and you can say hello to the various electronic gremlins. That’s how the magic happens. On the other side, you can easily remove this air inlet so occasionally just check and clean this area.

-It’s also good to check the trunk, especially the spare tire area for water since the tail lamp seals can fail and let the water inside.

-And of course I have to mention the sunroof water drains which can be again clogged, so if your car is equipped with sunroof then don’t forget to occasionally clean them.

There are cars with:

–the air suspension only on the rear axle

Obviously if you want a reliable solution then try to find a car with the regular suspension, because the air suspension is in this case really not the most reliable. The lifetime of the genuine Mercedes air springs is usually somewhere near 96 000 km / 60 000 mi or 112 000 km / 70 000 mi, so be prepared to change the struts if they start to leak which can happen anytime basically.

“There is no need to buy the very expensive parts from the dealer, because you can buy them from a well known aftermarket manufacturer for a much better price”

From the petrol engines the most reliable is the older 5.0l V8 with the M113 engine code which was available only in the early production cars-which is little bit a paradox. On the other side, the other engines are not that bad either although there are 2 possible problems which can occur on these newer units.

-The first is the well-known balance shaft sprocket failure which can occur mainly in cars made to 2007 but also on some of the early 2008 models. Mostly the V6 engines are affected by this, but rarely there are cases of some V8 engines with worn sprockets. Because of the already mentioned worn balance shaft sprockets the timing chain can fail which can destroy the engine. All in all, it’s simply better to avoid the cars made to mid-2008 unless the previous owner replaced the sprocket and the timing chain since it can cost up to 4 000€ to fix this preventively.

By the way there is also the rare R63 model which is simply madness on wheels, but there is a known issue with these AMG engines. Because of the faulty head bolt design the head bolts can fail and this usually causes head gasket failure which is in this case a very expensive issue. So if you are buying one of these and you found one, then you should preventively change these head bolts. You can find more information about this head bolt issue in my Mercedes E55 / E63 used car review.

This R class can be equipped with only the 3.0 l V6 diesel engine which can have various power output variations. The reliability of this unit is not bad – it can withstand 300 000 or 400 000 km, so except the usual diesel engine problems it doesn’t have many specific issues. But this doesn’t mean that it’s bulletproof, so there are 2 issues which are more common and which are worth mentioning:

-The first is related to the inlet port shut off motor or the swirl flap motor in other words. This motor can fail causing limp mode/reduced performance and an illuminated check engine light. This failure is caused by the seal on the turbocharger which will let the oil to slowly drip into this motor. how to fix the motor for free

-The next issue is the famous oil cooler leak caused by the seals attached to this oil cooler. You will definitely notice this leak since there will be traces of oil under the car and on the lower engine plastic panel + if you look at the bottom of the engine then you will see the black oil appearing at the rear of the block. Because of the heat the old seals can fail prematurely, and that’s why Mercedes updates these seals. The new updated seals are cheap, but that damn oil cooler is buried deep down in the middle of the engine(-between the heads) so you will have to remove a shit ton of parts to access the cooler(you have to remove various hoses, pipes, random boxes, the turbocharger + the intake manifolds). how to replace the oil cooler seals quick video

-check for smoke from the exhaust

And try to find an example which is not living its last days, and which has not travelled to the Moon and back.

All the engines are equipped with timing chain which can be worn after 250 000 – 300 000 km, so I would be prepared to change it after this mileage point. (But of course some of those engines with the balance shaft sprocket failure can have issues with the timing chain much earlier)

This Mercedes can be equipped with the 7 speed automatic gearbox only. Definitely check it properly before buying and change the oil in it, because there are numerous cases when the conductor plate failed. This is a bad situation to be in since the whole transmission is really expensive. But there is no need to replace the whole transmission because the conductor plate itself can be repaired for around 250 €, but in this case it’s good to change the transmission oil with the filter as well and that is + approx. 350 € at an independedent mechanic.

To summarize things up: it’s better to buy a properly maintained car made in late 2008 or better made from 2009, buy only a car with maintenance history, find a good independent specialist, change all the fluids in time and keep at least 3 000 € for the possible repairs.

As usual check the car properly before buying, and if you have personal experience with this car or more information about it then you can write it into comments! 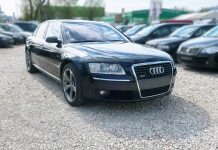